The Rationale for Determination of the Optimal Apical Size 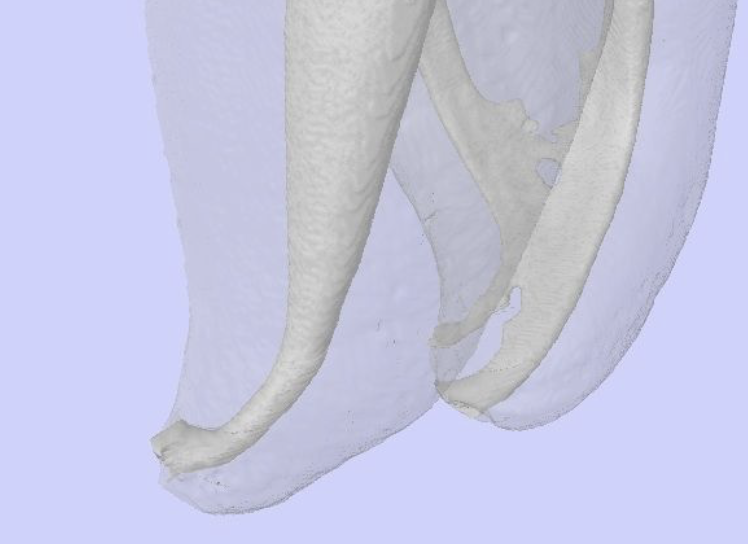 In a previous blog, we discussed the NLE/U Penn philosophy for establishing working length. Our objective was to demonstrate a cogent, bio-clinical, evidenced based argument for locating the terminus at the cemento-dentinal junction which anatomically means 1 to 2mm short for a vital tooth and 0.5 to 1mm short for a pulpless or non-vital tooth. This blog will address the NLE/U Penn philosophy of working width / apical sizing. The clinician must embrace the fact that the biologic mandate for predictable clinical success is attained in the apical third of the canal [absence of peri-radicular periodontitis]. Said another way, microbial control (prevention or elimination) in the apical third will determine a positive biologic outcome for root canal treatment. The clinical challenge is to eradicate microbes in the apical third without iatrogenically compromising the tooth coronally and jeopardizing its survivability. The objective is to begin with the end in mind. 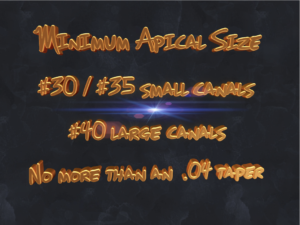 WHY THESE SIZES? If we would mechanically scale the internal walls of the root canal space, 90% of the microflora found in planktonic form (loose swimming) could be eradicated from the primary canal by flushing with sterile water. Unfortunately, the residual microflora are retained in the biofilm attached to the labyrinthine irregularities of the canal walls. This leave us with the option of chemically killing and/or removing the exposed microbes in order to prepare the root canal space for filling. The research into biofilm disruption is an ongoing pursuit and current modalities will be discussed shortly. 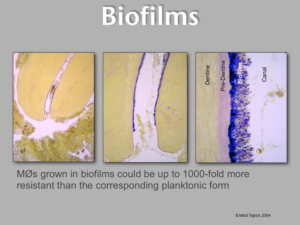 Biofilms are a constant source of new planktonic microbes which mandates that the biofilm must eliminated in order to achieve a truly sterile root canal space. This has remained a technical conundrum as biofilms are 1000 times more difficult to remove than planktonic microbes. We know from our periodontal colleagues, that biofilm must be physically disrupted to enable irrigants to reach, flush and kill  the microbes. Endodontic files should in theory disrupt biofilms; however, the vast majority of endodontic files create round shapes regardless of whether they rotate, reciprocate or swagger.  The fact that canals are not round has been part of the endodontic literature for over a century and yet, until recently, no attempt has been made to alter instrument design to take this into account. 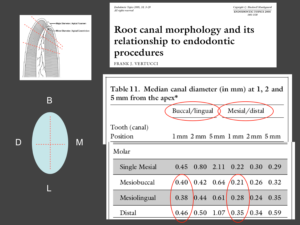 In an article by Vertucci, he shows that in lower molars, the mesio-distal dimension in all canals is much narrower than the bucco-lingual dimension.  Our objective should be to establish maximal safe apical sizes (MSAS) in order to disrupt as much biofilm as possible. The sizes shown in the graphic above are what one can consider safe. As can be seen from the illustration below, even with these maximal sizes there are numerous regions that cannot be reached with round files. The elimination of microflora within biofilm in the longest part of the ovate/oblong canal space is integral to ensuring maximal debridement and cleansing of the root canal space. For this reason, many adjunctive techniques and products have been developed to try to compensate for this shortcoming. Ultrasonication, the Endo Vac and the XPEndo finisher are a few of the adjunctive methods/products available. The faculty members of Next Level Endodontics, after extensive evaluation, have determined the XPEndo finisher to be their instrument of choice. 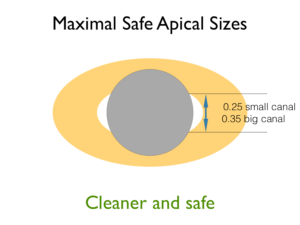 Perhaps the most misunderstood aspect of microbial control is irrigation. On the surface, it appears to be relatively simple to irrigate a root canal; in fact, it is one of the more complex aspects of the entire chemo-mechanical effort. In a conical tube such as a root canal, there are air bubbles (vapour lock) at the apices of the canals that are almost impossible to remove. The only way to effectively and consistently remove the vapour lock and ensure that the irrigant reaches all the inner surfaces of the apical third is to displace the air bubbles with something solid i.e. the irrigation needle that MUST be placed to working length. Working backwards, if our smallest irrigation needle is a #30 gauge, then we need at least a #30 file size for instrumentation in order to effectively irrigate the canal. A smaller apical size with a large taper will not facilitate movement of the irrigant into the critical regions of the apical third. As well, excessive dentin removal in the coronal third to facilitate the flow of the irrigant towards the apical terminus compromises the survivability of the tooth. The chart below shows the sizes needed in order to get the corresponding irrigation needle to working length. A side-vented needle is used to avoid pushing irrigant through the apex as well as to enhance turbulence of the irrigant.

The final reason for the suggested apical sizes is to create a shelf for the core material to stop at the cemento-dentinal junction and to move the sealer hydraulically into the micro-structural irregularities of the canal walls. For this reason, we need sizes that are slightly bigger than the minimal (mesio-distal) apical sizes. For small canals we need at least a size #30 (minimal diameter is #25) and for a large canal at least as size #40 (minimal diameter is size #35). It has been suggested that apical sizing with a round canal will give the clinician an indication of how large to instrument the canal. In terms of what has been discussed above regarding apical sizing, this does not make sense. A round instrument will measure the smallest diameter and therefore not give an indication of the largest diameter of the canal. Also if it indicates canal widths smaller than those suggested above, the effectiveness of the essential irrigation procedure will be jeopardized since the irrigating needle will not get to length and therefore not remove the vapour lock. 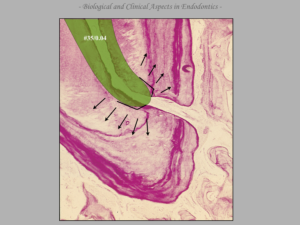 The following case demonstrates that with advanced metallurgy and innovations in engineering and design, it is possible to adequately clean the apical third without jeopardizing the coronal third of the canal. In the example below of a root canal treatment done on tooth #30 (4.6), the distal canal was 27mm and the mesial canals 26mm. The distal canal was instrumented to an apical size #40 while the mesial canals  were both instrumented to an apical size #35. All tapers were 0.04. Even though the apical third of the canals were instrumented to what may be perceived by some as large, the XPEndo finisher allowed the apical third to be cleaned in the bucco-lingual direction without the need to excessively taper the coronal two-thirds of the canal thus leaving a strong root with minimal risk of fracture. It should be noted that the chamber is coronally sealed upon completion of the root canal procedure. This is a biological imperative, integral to long term success. 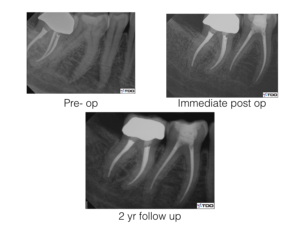 “Thanks to Dr. Ronald Ordinola Zapata for the use of the featured image”.